Across the Heart of Europe - Amsterdam to Budapest

Across the Heart of Europe - Amsterdam to Budapest

Booking Discounts Savings* UP TO $400 per couple/$200 per person

Morning Nuremberg City Tour - Afternoon at your own pace or Optional Tour of the Documentation Center of Nuremberg    (B,L,S,&D)

Amsterdam is the largest city in the Netherlands. It is the commercial, banking, and industrial center of the country and the official capital, although the actual seat of government is The Hague.  Amsterdam’s many canals add great beauty to the city, besides providing it with transportation routes. There are more than 50 canals and 500 bridges in the city. A boat trip through the canals gives a visitor a good first view of Amsterdam’s attractive old houses and busy modern harbor.   The Zaanse Schans Windmill Village gives you an authentic Holland experience complete with Dutch treats, windmills and wooden shoes

Enjoy a short walk through the quaint village of Hoorn with its rich history, before boarding your comfortable bus. Founded in 716, Hoorn rapidly grew to become an important harbour town. Take a drive through the Dutch Polder landscape to the old fishing village of Volendam, built on the shore of the former Zuiderzee. Take a stroll through the old village and see people still dressed in traditional costumes. Board your coach and drive out of Volendam into the countryside to visit a local cheese farm. Here, you will learn how Dutch cheese is made and to sample the local product.

After breakfast, arrive into the beautiful city of Cologne. Every year visitors from all over the world are drawn to the historical city and its 2000-year history. Explore the historic Old Town and visit the famous twin-spired Cologne Cathedral, along with the twelve Romanesque Cathedrals that span the city. There are many medieval houses, bridges, and gates that will delight the historian in you, while the more modern skyscrapers that tower overhead are sure to impress.  After an exciting day, return to the vessel spend the evening cruising the Danube.

Early this morning, join your fellow travellers on deck for the famous passage of the Loreley (morning time can vary). This narrow passage on the Rhine has inspired a modern day folklore story of the siren of the river.  After breakfast the vessel docks in Oberwesel, the ‘City of Towers’. Enjoy time on your own to walk around the wall that still surrounds much of the city. There are a large number of churches, as well as many historic houses that showcase the architecture of the 17th and 18th centuries.

Today, choose to remain onboard for a relaxing day or join our optional excursion in the afternoon to Miltenberg and Wertheim, two towns famous for their architecture and museums. Both are unique in their own way and are reflective of the storied history of the area. In Wertheim explore the medieval streets with its half-timbered houses and glass museum. In Miltenberg walk through the streets lined with half timbered houses and historic market square. This evening, enjoy another memorable meal as the ship plies the waters toward our next stop.

Welcome to the Bavarian city of Würzburg, located in the heart of the Franconian wine region! Experience the many beautiful sights of the town such as the marketplace, the Maria Chapel and the old main bridge, the Marienberg Fortress and the surrounding vineyards. As the central hub for wineries in this part of Germany, Würzburg is the perfect place to visit some of the local wineries for tastings.

The morning is spent cruising the beautiful Main. After lunch arrive in the UNESCO-protected Imperial city of Bamberg.  Visit on your own or join an optional to see the New Residence, the unique Town Hall built on a bridge, and the Imperial Cathedral with its four towers. Overlooking the city are seven churches, each atop a hill, surrounding the town. This evening, we transit the Main-Danube Canal highlighted with a talk onboard about this important waterway.

Following breakfast, enjoy your day in Nuremberg.  Your city tour includes a visit to the romantic Old Town of Nuremberg, lovingly restored after the destruction incurred during World War II. A hub for history, Nuremberg is home to many museums including the Documentation Center (visit optionally), which recounts the effects of the Nazi Regime and World War II on the city and surrounding areas.

Situated in Eastern Bavaria, Regensburg is one of Germany’s oldest towns, founded by the Romans in 179 A.D. Today it is a prosperous city with 3 universities and many landmarks dated to the Middle Ages.  Enjoy a Regensburg Walking Tour through one of the most visited cities in Germany and its Medieval Old Town, a UNESCO World Heritage site.

Passau is one of Germany’s oldest cities situated at the confluence of the Inn, Ilz and Danube Rivers. Passau is a beautiful and fascinating fairy-tale town with cobblestone streets and the famous baroque Cathedral of St. Stephen. The imposing fortress Veste Oberhaus is located high on the hill, overlooking the town and the three rivers. Back onboard, enjoy dinner as the vessel sets off toward the romantic Wachau Valley.ip.

In the early morning, dock in Emmersdorf, in the heart of the UNESCO-protected, cultural heritage landscape of the Wachau Valley.  Relax and enjoy cruising or join the optional tour to the Melk Abbey, a magnificent Benedictine abbey and the largest in Austria.

Back onboard for lunch, continue through the vineyards of the Wachau to the village of Dürnstein for an optional walking tour.  Spend the afternoon in the romantic village with its iconic blue church and winding streets, and perhaps sample the local wines or continue to relax onboard.   Arrive this evening in Vienna.

Enjoy an included Vienna City Tour.  For over 600 years, the magnificent baroque capital city of Vienna was the seat of the mighty Hapsburg Emperors, a heritage that has bestowed it with many dazzling palaces and monuments: the lavish Hofburg Palace, the impressive Vienna Opera House and the majestic Ringstrasse. The capital is also known as the “City of Music” for having once been the home of composers such as Beethoven, Schubert, Mozart and Johann Strauss.  In the afternoon continue your exploration or take an optional tour to Schönbrunn Palace, the sumptuous former summer palace and gardens of Empress Maria Theresia.

Awake today in the capital city of Bratislava in Slovakia.  Walk through the city, see the home of the Slovak Philharmonic Orchestra, the old city walls, the summer residence of the archbishop and the current residence of the president of Slovakia. Traverse through the restored old town, from Michael’s Gate, and admire other impressive sights such as the Primatial Palace and St. Martin’s Cathedral, former coronation cathedral for Hungarian kings. Bratislava is a little jewel along the Danube. This evening celebrate with the Captain’s Gala Dinner.

The beautiful Hungarian capital of Budapest is a perfect finale to your trip. One of the largest cities in the European Union, Budapest offers many interesting sites, including the largest building in Hungary: the neo-Gothic Parliament building, Fisherman’s Bastion, Buda Castle and the Chain Bridge, which connects the two sides of the city – Buda and Pest. Onboard this evening, enjoy a Hungarian Folklore Show. The ship docks and remains overnight in Budapest. 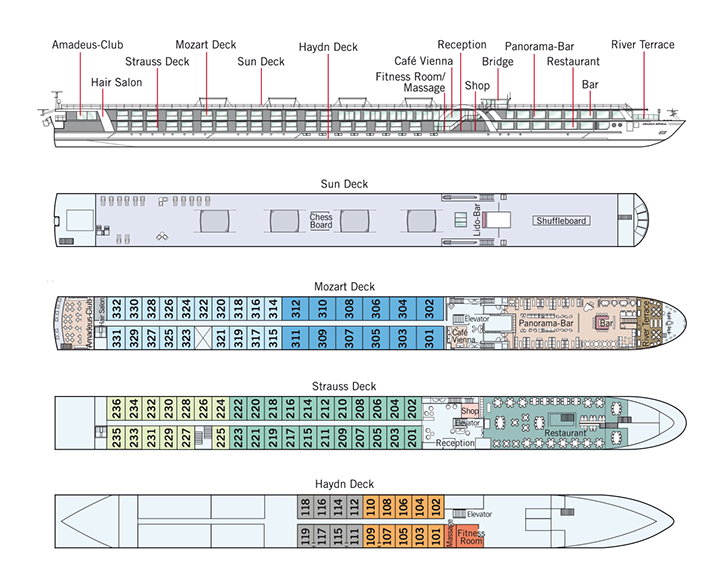 The innovative 168-passenger Amadeus Imperial, NEW in 2020, features all the amenities of a floating 5-star hotel while offering the effortless combination of vibrant energy & intimate small ship experience.  This Premium cruise ship features the most modern furnishings that blend masterfully with the architecture of the ship and a luxurious design that is the hallmark of the Amadeus fleet. The extensive Restaurant and the Panorama Bar offer divine views of the passing riverscapes, and the glass-shielded River Terrace allows you to relax in the open air regardless of the weather. The attentive English-speaking onboard service staff will see to your comfort with typical European hospitality.  The cabin design plans are forward-thinking, bright & modern, all part of a premium focus with 72 large Staterooms & 12 Suites. The beauty of river cruising is that the most interesting destinations come to you.  This Imperial charter features English-only onboard commentary with inclusive shore excursions balanced with choice to simply relax onboard, get a spa treatment or add sightseeing with optional excursions.

All Meals Included Onboard

Three meals daily are served graciously in the exquisite restaurant and feature local & international specialties.  All dinners are four courses and are served with included Regional Wines & Beer. While dining, you have splendid views of the passing scenic landscapes through the large picture windows.  Enjoy afternoon and/or late evening snacks in the lounge based on the daily schedule.